In terms of personnel, those working exclusively in the circulation, production, promotion or advertising areas of newspaper work are excluded. Proprietors are also excluded if they took no part in the actual running of the journalistic side of the paper or if they had no role in the founding of a newspaper. Also, contributors whose income from newspaper work did not constitute a significant part of their overall earnings or whose main career was overwhelmingly outside the newspaper profession.

Also those working on publications that were published less frequently than monthly are excluded unless they also had at some time in their careers worked on a weekly or a monthly publication.

Thus those who worked exclusively on what was known as the quarterlies such as the Quarterly Review, or the Contemporary Review are excluded. 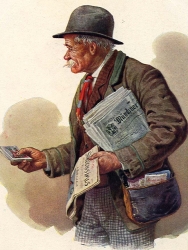